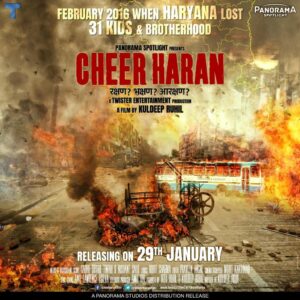 Filmed by Kuldeep Ruhil, this hard-hitting documentary lifts the veil off the heinous violence that erupted in 2016. A major conflict hit Haryana when a peaceful agitation blew up into unspeakable carnage. Covering candid accounts of the victims, deep insights from the peacemakers as well as perspectives from both sides of the fault lines, the documentary addresses widespread misinformation about the events leading to it and the aftermath.

Abhishek Pathak, Director and Producer at Panorama Studios says, “We are very happy to offer the trailer of Cheer Haran to the viewers. This documentary is an effort towards remembering the lessons we’ve learnt from human conflicts. I hope we are able to shed light on the facts and the compassion that was needed at the time.” While launching the trailer Jaideep Ahlawat said, “The Haryana riots of 2016 compell us to revisit the events and learn the lessons to avoid future conflicts and violence. I am honoured to launch the theatrical trailer of Cheer Haran. It is a timely reminder of what absence of harmony can do to a state and a nation. I wish the director, Kuldeep Ruhil and his team very best for the theatrical release. It is commendable that they have undertaken this mammoth task of bringing out the facts with this film. I hope we all rise above our petty differences to find the peace we deserve.”

Director Kuldeep Ruhil says, “In the current scenario, it is very important to look at the simmering conflicts with the benefit of hindsight. We are repeating the mistakes of past because we have forgotten the Whys and Hows of it. The trailer captures the impartial spirit of the documentary which in turn tries to recreate the Jat Reservation Andolan and Riots through the voices of people involved. We hope our effort contributes in inspiring viewers to seek truth and learn from it.” Presented by Panorama Spotlight and produced by Twister Entertainment, the film will hit the cinemas in North India on January 29th. It is a Panorama Studios Distribution release.

Trailer of the film has  Crossed One Million In Just One Hour. Cheer Haran Trailer Is Being  loved by the audience .